I had the opportunity to visit Dynamicland, the lab where Bret Victor and his team are exploring a new medium for computing that’s oriented towards collaboration, physical space, and empowering anyone to create.

At Dynamicland, rather than hunch over their own individual computers, people gather around tables rearranging pieces of paper together in order to “program” the system. You can find more background in these articles. 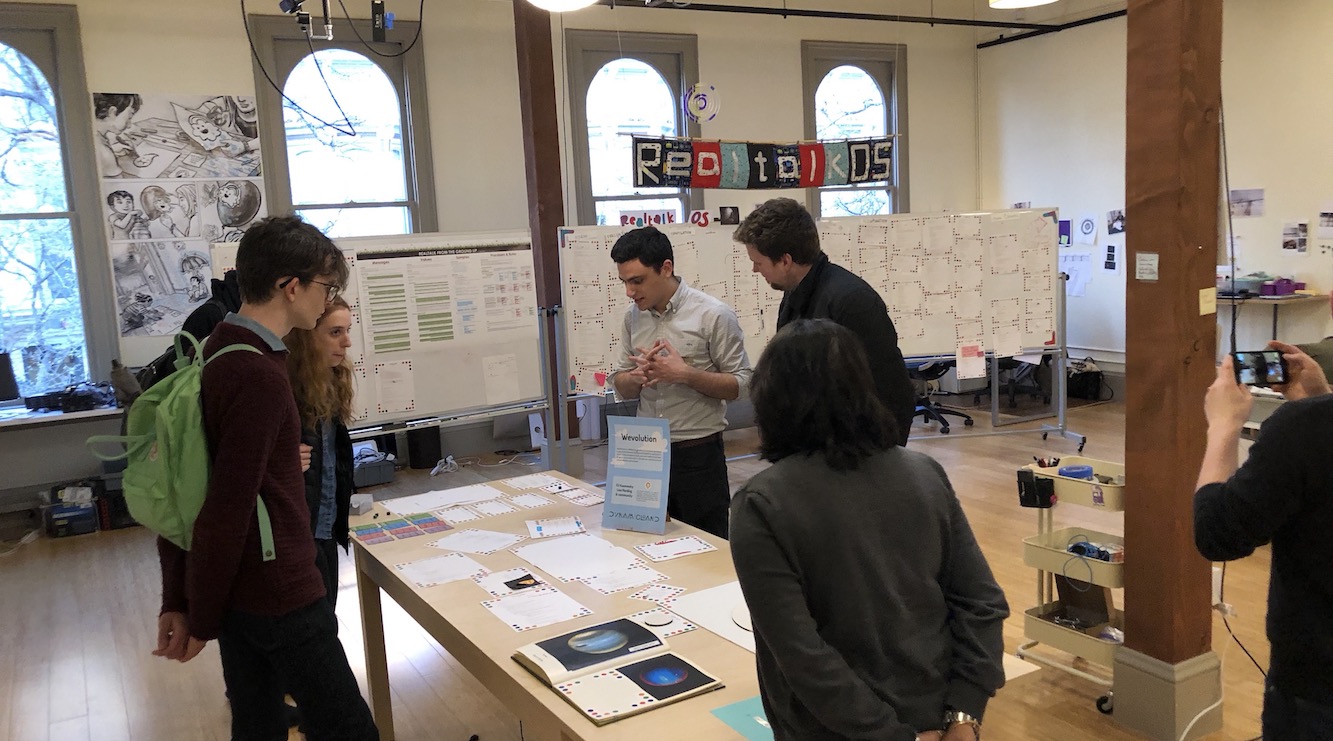 Over a couple days in the space, I built some small experiments exploring possibilities for programming in this environment, focused on empowering anybody to modify any program.

Most of the work enabling these demos, including the OS, programming model, and hardware setup, was done by the amazing team at Dynamicland. I was merely exploring in the medium that they created.

Alan Kay’s original vision of object-oriented programming was based on the idea of recursively decomposing a computer into parts of equal power to the whole. In a physical programming environment, not only can we have real world objects that encapsulate the full spectrum of computational behavior, we can also use spatial manipulation to affect their relationships.

I wanted to try making an object-oriented program with two properties:

I ended up making a toy for people to explore binary numbers. Here’s a quick demo video:

Each digit page is an object; in addition to containing the data about what digit it is, it also contains all the behavior for connecting to other nearby digits, chaining together a binary number to display, and converting the result to decimal. The entire UI of the program is simply rearranging these digit objects into different spatial configurations.

This feels quite different from a traditional visual programming approach of connecting boxes and wires. Spatial layout goes beyond a convenience for our understanding to being an essential part of defining the behavior. Having behavior decentralized into independent objects creates surprising possibilities for how objects can interact with each other. The line between using the program and changing the program becomes blurred.

There are many open questions about how this style of programming would work in other contexts or in scaled-up applications, but for enabling anybody to remix a program that they’re using, I think it could be a fruitful direction to explore further.

Usually when we see a program running in the world, whether an iPhone app or the control system for our car, it’s not easy to see how it’s implemented.

In Dynamicland, the code for every program is literally printed out on paper, which makes it somewhat easier to inspect how a program actually works. Still, reading code is a pretty tedious way to understand a program.

I wanted to see what it would feel like to walk around a room with a special magnifying glass that could show you the insides of how any program is working, live as you use it.

As a first step, I created a small tool that you could attach to any program to graph any internal numerical variables over time. (Many software debuggers only show you the current state of the program, but seeing trends over time is often useful.)

Here’s a demo of using that tool to see the internal state of a slider as we move it. The slider is controlling the year value feeding into a historical data viz that somebody else made at Dynamicland.

The physical nature of the tool made it feel more like attaching an oscilloscope to a circuit than using a “debugger”. Even with such a simple tool, it felt a little bit magical to be able to literally connect a visualizer to a running program. In a future world where computation expands off of our smartphones and into the world, I hope everyone can carry around these sorts of tools to see inside the programs running our world.

I didn’t have time to develop the idea any further, but a few ideas I had for improvements: